What started as fun bedtime stories in 1975 for my daughter when she was almost three years old has resulted in a series of wonderful children’s books.

One night as I was telling my daughter a story just before she was to go to sleep, I started with a familiar beginning:  “Once upon a time, there was an ant…”  My daughter interrupted me with a question:  “Daddy, 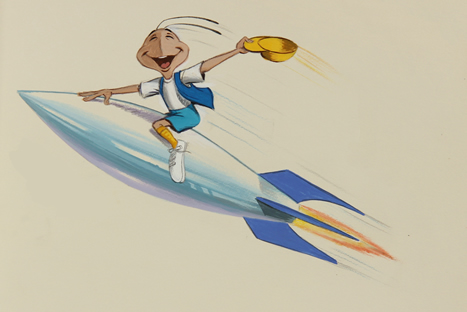 what was his name?”  I thought to myself for a moment, “What rhymes with ant?” The next word I said was, “Andy.”  That was all she needed.

Her next question was, “What did he do?”  That night in the darkness of her bedroom before she drifted off to sleep, the adventures of Andy Ant began.  Night after night for many years I told stories about Andy Ant to both of my daughters. Each story always related to what they had done that day and concluded with a real-life lesson based on their young life experience.

In July 1985, while my brother, Jerry, and I were enjoying a day together in the Rockies in his four-wheel rig, things began to change.  I shared with him that writing a book was actually fun. I had just completed Giving Yourself Away and commented that I should probably dive in and begin working on the Andy Ant adventure stories.

Jerry then shared that he had also been telling his daughters similar Andy Ant stories. He proposed that we create a partnership and do a series together. The idea clicked.  Before we returned home that evening, we had created Andy Ant Productions, Inc.  Throughout the day we brainstormed story lines and created additional fun-loving characters that were friends of Andy and Joseph Tyler Johnson (known as Joey by his friends and family).

As creator of Andy, my task was to find a publisher.  Jerry became the author of the adventures.  We created stories together based on the stories we had been telling our girls for a number of years.   At that time we had no idea what Andy, Joey, and their friends and families looked like.   We knew we would eventually need to find an experienced illustrator who would bring visual life to Andy, Joey, and their friends and families.

Adventures With A Purpose

Each Andy Ant story is an exciting adventure that happens during a day with Joey and Andy.  Joey relates the adventure to the young reader.

You can learn how Andy and Joey met by reading the first book of this series, Lawn Mower On the Loose.  The stories are fun and full of surprises, but each one teaches a valuable lesson or principle that is foundational to kids learning how to live a fulfilling and productive life.

An International Art Contest to Find the Illustrator

Over 20 artists from around the world competed for the privilege of creating and illustrating the Adventures of Andy Ant books.  Their submissions were good, but one submission was exceptional.

Norman McGary learned about this international contest quite by accident.  He stopped into our publisher’s headquarters while looking for a particular book.  He commented in a brief conversation that he had worked as an illustrator for most of his professional carrier.  The receptionist on duty told him about the contest, and he turned down the invitation to participate.  But he agreed to take the prepared packet and at least look it over.

A few days later, Norm returned to the publisher’s office.  He explained that over the few days he had fallen in love with Andy Ant and he wanted to illustrate the books.  He had illustrated a two-page spread and created a five-inch clay model of Andy.

It was then that we learned that Norm had worked directly for Walt Disney for over 20 years.  He was involved in illustration development of many of the Disney characters and early Disney releases.  He eventually became a free-lance illustrator and worked for Hanna-Barbera Productions, Warner Brothers, and Jeremiah Films for another 20 years of his professional career.

When reviewing the 20 submissions for the art contest, one illustrator’s work clearly stood out; and Norm McGary was awarded the opportunity to become the illustrator for the Adventures of Andy Ant book series.